The New England Clean Power Link Project (NECPL), is a high voltage direct current (HVDC) electric transmission line with an operating voltage of +/- 300 to 320 kilovolts (kV). The project would be constructed in both aquatic (underwater) and terrestrial (underground) environments.

As proposed, the NECPL project would have a transfer rating of 1,000 megawatts (MW). The proposed project would originate in the Canadian province of Quebec and terminate in Ludlow, Vermont. From the Canadian border, the line would be located underground in Alburgh, Vermont for approximately 0.5 miles (0.8 kilometers (km)) and would enter Lake Champlain via a horizontal directional drill (HDD). The cables would then be installed in Lake Champlain, within the jurisdictional waters of Vermont for 97.6 miles (157.1 km). The cables would emerge from Lake Champlain in the town of Benson, Vermont and would be buried along town roads and state highway rights-of-way for approximately 55.7 miles (89.6 km) until terminating at a proposed converter station in Ludlow, Vermont. The total HVDC portion of the project is approximately 153.8 miles (247.5 km). The project would also involve the construction of a single circuit 345 kilovolt (kV) underground high voltage alternating current (AC) transmission system which would run approximately 0.3 miles (0.5 km) from the converter station in Ludlow to the Coolidge Substation located in the towns of Ludlow and Cavendish, Vermont. The total length of the proposed project from the U.S. border crossing in Alburgh to the Coolidge substation is approximately 154.1 miles (248 km). 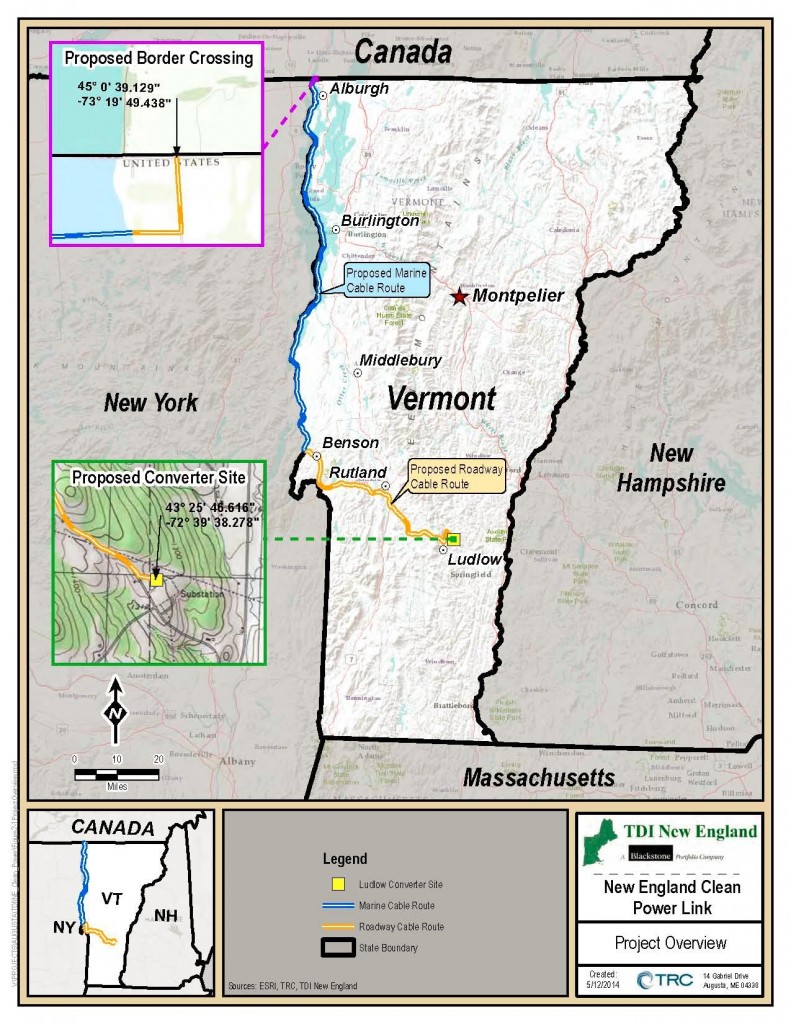